Event: Bake With Your Heart

As I have already described my holiday experience in Mauritius in " When Dreams come true", here I would like to talk about the most important part of our holiday which has made our trip memorable. And that is our stay at the Movenpick Resort & Spa.
Before selecting the resort I went through a lot of reviews and even asked a few people through email. Two resorts were running neck to neck, one was Movenpick and the other one was Jalsa Beach. I went through the websites of both these resorts and had a look at their gallery and finally we reached Movenpick on 22nd June,2010.
The resort was located in the south-west coast in Bel Ombre. It took almost 2 hours to reach there in the minibus. On the way we passed through small localities, few local markets and lots of green field, mostly with sugarcane cultivation. And the more we were nearing our resort, we could feel the fresh air coming from the sea-side. There was a small bridge which was so narrow that two vehicles could not drive together, hence it was operated on the basis of an automatic signal.
When we were almost 20 minutes away from Movenpick, there was a spot where the Indian Ocean was at a stone's distance from us. I guess that place was a local picnic spot as later during our stay I had seen people gathering there on weekends and having fun with their family.
We reached the resort premise at around 3:30 p.m. All our tiredness of traveling just vanished by the way the hotel stuff warmly welcomed us. They took all the luggage without even asking anyone which one belongs to whom!! We were directed to their waiting area where we had to finish some formalities like filling up forms with our details, duration of stay and choice of food etc etc. Meanwhile we were served a chilled welcome drink. They had two different flavors and I took the Orange juice one. It was a nice view from that waiting lounge as we could see the backyard of the resort with its volleyball court and beach.
After half an hour of wait we were taken to our room. On the way there were a boutique, some other gift shops. Our deluxe room was on the first floor. The moment we entered the room we could feel a refreshing smell. The first thing my hubby told me that it was a very nice choice.... There was a king size bed, a TV, electronic safe, a minibar and a kettle. Also there was unlimited supply of milk, sugar and tea bags. It was just that you would have to ask the room service to fill in the new stock. We also got a complimentary fruit basket, a bottle of red wine, one pareo and t-shirt special add ons to honeymoon couples. Be careful before using their minibar as the alcohols were priced at much higher rate. Also you would not get water for free!! Two bottles of water were priced at 90 Mauritian currency (almost 140 Indian rupee)!!

The view from our balcony was just awesome. Everyday at around 11 a.m. house keeping staff would come to clean the room and they even arranged our clothes sometimes!! The towels were clean but you have to make sure that all the towels are changed everyday. You can get beach towels from them and also the toiletries ( they provide very less toiletries at a time). You will also get hair dryer. It would be advisable to carry an appropriate adaptor to charge your mobile phone or your camera (as in our case we could not charge our mobile for this). The morning breakfast used to be open from 7:00 to 10:00 a.m. in the main restaurant "Le Moulin" (serves buffet only). There were 2 other restaurants, La Grand Caze (mainly for dinner and specially the candle light dinners that the restaurant offer with the honeymoon package)  and Le Camaron (its for lunch) and the main bar, Flangourin, next to the main pool. We were on a half board package ( that includes breakfast and dinner buffet), hence we ate at Le Moulin only. You can sit inside or have your breakfast in the open area. But in the morning it used to be a little cold, so we chose to sit inside only. While having our food, we could see small birds chirping around, I even gave one bird a little piece of bread!! The breakfast menu was same for all the seven days: varieties of bread, fruits, sausages, pancakes, ham, yogurt and some other milk products. After breakfast we used to have a long walk along the beach. The beach was very quiet and clean. It was a little difficult to walk bare footed throughout as there were lots of small pebbles and few sea urchins!!
Apart from the main swimming pool there were two more pools, one specially for the kids. There were a lot of  sunbathing chairs along the beach and the pools. The resort offered some complimentary activities like : snorkeling, kayak, glass bottom boat, paddle boat, wind surfing. But to avail most of the activities, one should have booked the slot at
least a week ago!! 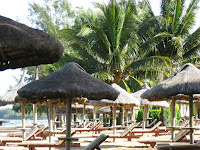 Which was not  possible in our case as we stayed there for a week only, so we could only use paddle boat and got our slot for glass bottom boat on the second last day of our stay. But it was a nice experience for an hour and half. We went close to the huge waves which were almost tossing our little boat with its 10 passengers.....at one point it became scary as the boat's engine stopped for 15 minutes and one of the passengers started screaming out of fear. We had a great view of the coral reefs, fishes. Also one can spend time in aqua gym or on table tennis  table or volleyball court. The Aldana Tropical Spa's timing was from 9:00 a.m. to 8:00 p.m. We had a complimentary half a hour spa massage for both of us (we had taken our spa massage slot the day we reached there and we got it on the third day morning). After that we spent 2 hours in sauna, steam and jacuzzi, all free of cost for that day.
The night buffet used to start as early as from 7:00 p.m. and it was theme based. During our stay we had American, African, Italian, European, Indian themes and everyday they kept few Indian food items at one corner as the resort was a hot destination for Indians.The varieties of sauces, chicken, duck, deserts, rice, pasta, noodles, sea foods were countless. During dinner time they provided free drinking water, which was a nice thing I guess. For the first time I ate baby Octopus, squids and I liked them!! On the Sunday night dinner there was a surprise performance from the resort's side, there were 4 ladies wearing some extra colorful dresses, dancing and singing with the rhythm of the drums. On the second night of our stay we got an invitation for the candle light dinner (complimentary for honeymoon couples) at La Grand Caze where the dinner table was near the pool and there was a musician playing his guitar. There we had Indian dinner and a bottle of complimentary Champagne. It was very very romantic...
It was told not to tip everyone separately as the resort had a policy where one could pay the total amount of the tip directly to the resort and the resort would distribute it to all the staffs on special occasions. The resort had a very cozy atmosphere which I liked a lot and would like to return there again.
A suggestion : Once you will reach Mauritius buy at least 2 to 3 bottles of drinking water from the shops near the airport. Or you can buy it on the way to the resort if you find any super market or shop. It will be much cheaper (around 30 Mauritian rupee) than at the resort. And when you will go out for any tour the guide will take you to super market once. Hence you can get a new stock.
Posted by khushi at 1:14 AM

Sneak peek into my gallery